Eric began his acting career taking the stage in shows like Bye Bye Birdie, The Wizard of Oz, and Grease. While studying film and theatre in NYC at Marymount Manhattan College, he appeared in other productions in the Tri-State area including: Spring’s Awakening, Reefer Madness and Hairspray. Simultaneously, Eric began a career in modeling that led him west to Los Angeles following his college graduation. Los Angeles is where his passion for TV and film has grown immensely and he continues to audition and train regularly. After many years studying at the Anthony Meindl Actor’s Workshop he has made a move to Susan Giosa’s Acting Workshop to further expand his craft.

Since moving to LA, Eric has been seen in many productions across the southern California region as well as some TV and Film; most notably in the role of Lance Hobart in the feature film DEADLY SCHOLARS (now streaming on Netflix) as well as the international tour of Broadway’s KINKY BOOTS 2017-2018 and EVITA in the spring of 2019.

DEADLY SCHOLARS is now available to stream on NETFLIX and to rent or own OnDemand and Digitial HD!!! 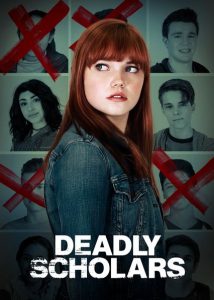 Eric spent 2017 and 2018 on the road in the US/China/Singapore International Broadway tour of KINKY BOOTS. He played one of Lola’s Angels and got to share a joyous and heartfelt message with fans worldwide. See their closing performance of “The Sex is in the Heel” from the US tour in South Bend, IN.

“My Oh My” by Camila Cabello

Eric was featured in the short film “VICEROY” written by Marcellus Barron.